Naylor and Ball design conceptual artifacts, which both illuminate and question design culture. They call this activity ‘Design Poetics’. Design Poetics forms an experimental, continuously evolving series of objects and collections, which act as commentaries and contemplations on the cultures of Modernism, Postmodernism and contemporary design.

Naylor and Ball were awarded a major AHRC Innovation Research grant for ‘Sustaining Desire: the chair as cultural, ecological and visual narrative; exploring the relationship between narrative, materiality and the emotive”. The project generated a collection called ‘Archaeology of the Invisible,’ which exhibited in Milan, Paris, Glasgow, Shanghai and New York. They subsequently completed a book about their work and ideas called ‘Form Follows Idea: An introduction to Design Poetics’. (Black Dog Publishing, London and New York)

A more recent collaboration and exhibition ‘Indeterminate Cases’ was presented in the prestigious La Sala Vincon, Barcelona and subsequently at England and Co Gallery London.

‘Not for nothing are Maxine Naylor and Ralph Ball widely regarded as among Britain’s most thoughtful furniture designers. They have been building up to this book for a long time, slowly and carefully generating the intellectual impetus to carry their study of the meaning of objects into the territory where design meets art. Practical philosophy could be one way to describe their approach.’

Studio activity can be seen at www.studioball.co.uk 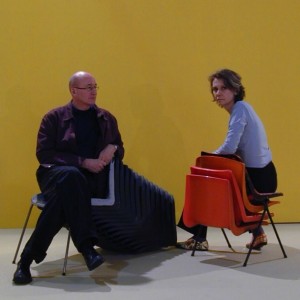